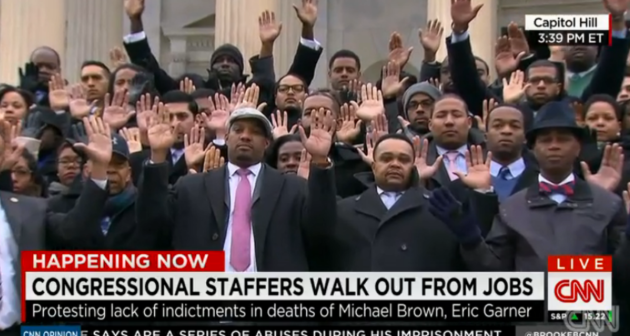 In recent weeks the soon to be former U.S. Attorney General released the DOJ findings on policing and justice in Ferguson. A hallmark of the comments made publicly by Holder was that for law enforcement to work there must be TRUST. He was correct, but wouldn't it be nice if he practiced what he preached.

As we all know, the rally cry of this Ferguson movement was “hands up, don’t shoot”. And now we all know that there is exactly zero basis in reality to believe that there was a factual basis to support this “hands up” symbol. Yet that did not stop the media, Holder, celebrities, and others to rush to judgement and perpetuate the lie of this symbol.

If you want a movement to last and make progress you need TRUST, and you cannot use for that movement a symbol that is based on a lie. Instead of doubling down on “hands up” Holder, and others should walk away from that and find a symbol based on reality.